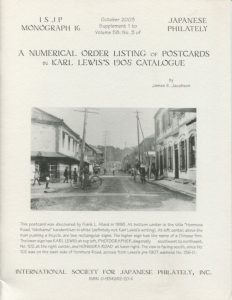 ISJP Monograph No. 16: A Numerical Order Listing of Postcards in Karl Lewis’s 1905 Catalogue

Karl Lewis was an American who spent the last forty years of his life in Yokohama, and is widely famous for the thousands of covers that he sold from 1933 to 1941 with full-color cachets hand-painted by Japanese artists.

However his first career in Japan was as a photographer and a publisher of picture postcards for sale in Japan or by mail to overseas customers. Most of the cards have a description of the design in English, a three-digit or four-digit number, and an inscription identifying Karl Lewis as the source.

An undated catalog of these postcards, determined to have been produced by Karl Lewis in early 1905, groups the cards under 84 different subject headings. Although this topical arrangement would have helped Lewis’s customers to find cards on subjects that interested them, it makes it tedious for collectors a century later to locate a specific card.

To help address that problem, this monograph lists the contents of the 1905 catalog in numerical order, sorted by the numbers which Lewis himself printed on each card. In all, 1,341 postcards are listed.