ISJP members are spread over the world, with some on almost every continent.  Therefore it is not practical to hold regular general meetings.  But the the society encourages the formation of  autonomous regional chapters which do hold regular meetings and sponsor or take part in exhibitions. Currently we have chapters in London (United Kingdom), Copenhagen (Denmark), Washington DC (USA) and Southern California (USA)

It does not matter how many ISJP members get together to form a chapter.  But if members in you area would like to have a chapter, please let the Secretary know. 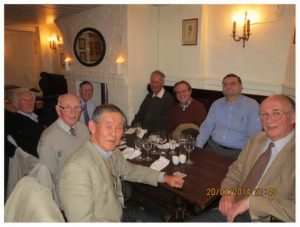 The photo shows the group at The Albion restaurant where the meeting was held on 20 February. Gen Fujise came from Switzerland again.  Florian Eichhorn, like Ken Clark, a Director of the ISJP, flew in from Germany.

The British Society for Japanese Philately seeks to further the study and enjoyment of Japanese philately in the U.K. and contact between all its members.

The BSJP is always pleased to welcome visitors from other countries  visiting the UK. If interested, please contact Alan Cowie by email. 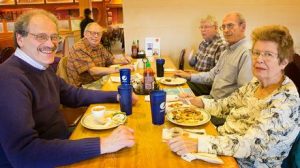