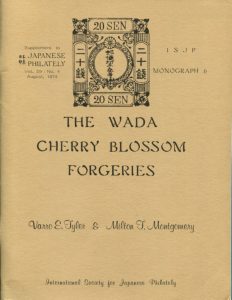 Wada Kotaro was the most prolific producer of forgeries of Japan’s classic Dragon, Cherry Blossom and Koban stamps. Wada’s early Cherry Blossom forgeries included sankō (reference) or mozō (imitation) in the design and were printed from plates of six (3 x 2) with similar but not identical hand-etched designs. His later plates contained eight (4 x 2) different designs and omitted the sankō and mozō.

This monograph provides a detailed study of each of Wada’s 46 different (two or more for each denomination) plates including an enlarged image of each different design type (position) in each plate, together with a detailed description of their individual characteristics. It also defines and lists the various ‘states’ of the 6-stamp plates, produced primarily by the relocation of sankō and mozō, but also by other major design retouches.

Although published in 1974, this monograph still remains a valuable reference source, although it should be noted that all the information contained within it was reproduced and updated with subsequent research in ISJP CD-ROM Monograph No. 1 – 2nd edition published in 2002.