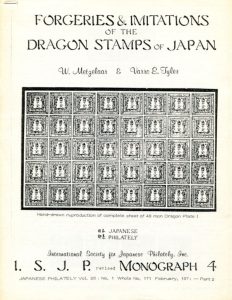 W. Metzelaar and Varro E. Tyler,
Forgeries and Imitations of the Dragon Stamps of Japan, 1971. 24pp

ISJP Monograph No. 4: Forgeries and Imitations of the Dragon Stamps of Japan

The Dragon Stamps of Japan stamps have been extensively forged by several different producers. This monograph details all the forgeries and imitations of these stamps known at the time of its publication in 1971. This includes forgeries created by Japanese producers Wada Kotarō, Kamigataya, and Hirose, the Spiro Brothers in Germany, as well as creations by unknown identities and even official imitations.

The Wada forgeries consist of different (either six or eight) design types within each plate, and an enlarged image of each different design type for each denomination is provided. It also defines and lists the various ‘states’ of the 6-stamp plates, produced primarily by the relocation of the sankō (reference) or mozō (imitation) incorporated in their designs.

Although all the information about the forgeries was updated with subsequent research in ISJP CD-ROM Monograph No. 1 second edition published in 2002, this monograph also includes informative biographical facts about the producers, particularly Wada, and still remains the principal source of this information