Articles are Presented in “Flipbook” Most Recent First

To read: Use the second icon from the right for full screen mode and the large arrows at each side to more forward and back through the pages of the article.  [ESC] gets you back to this landing page.

Most of the icons under the book are intuitive and each has a small pop-up with information when you hover over it.  The fourth icon from the right allows you to download the full pdf to your own machine.

To see the full article in a flipbook, click on the appropriate excerpt graphic below.

The winner of the ISJP sponsored literature award at SESCAL 2020 was Harold Krische for his article “The 1919 Ninoshima Camp Exhibition and its Postcards”, for which he received a Large Gold Medal Award. The full list of ISJP members who won awards for their Japanese-related articles at SESCAL 2020 appears here.

Karl Lewis and the China Clipper

Karl Lewis and the China Clipper by Todd L. Lewis. This is a China Clipper cover which passed through the hands of Karl Lewis. A previous discussion of the China Clipper service to Japan featuring a 1939 cover from Dwight D. Eisenhower was the subject of an article published at JP 40/130-134 in 1985…
This is a round-trip cover which traveled 41 days not including the unrecorded time to get the cover to San Francisco for the initial flight and to forward it from Brockton to New Bedford on the return leg. Besides being a first flight cover, it is a first-day cover (for the US 25c airmail stamps), and a “To” Karl Lewis cover (see JP 72/266-310).

2020.5.29 Japan’s 4th National Treasures Series. Japan was overdue to issue another series of stamps that commemorate its many national treasures. There have been three previous series of national treasures stamps. The first series was issued in 1967-69 and comprised 7 sets totaling 22 stamps. This was followed in 1976-78 with a second series of 8 sets totaling 16 stamps, and in 1987-89 by a third series that also totaled 16 stamps issued in 8 sets. The issue consists of two sheets of self-adhesive stamps, one comprising ten ¥63 designs and the other ten ¥84 designs. Overall design was undertaken by Maruyama Satoru based on photographs provided by a number of different sources.

Published April 2020. On 22 November 1993 the Postal Services Ministry (former name of Japan Post) issued a set of three international airmail picture postcards. It continued to issue similar sets of picture postcards on an annual basis until the final issue on 7 October 2002, which was subsequently followed with a formal announcement of discontinuance on 30 March 2003. It was therefore with some surprise to hear from ISJP member and postal stationery dealer Mr. Y. Suzuki that Japan Post was intending to issue a set of 4 such cards on 1 April this year. Although there is an announcement dated 2020.3.12 about this issue on the Japan Post website, Mr. Suzuki advises that there was next to no prior promotion and its existence caught many collectors unawares.

From Kobe to New York: A cover delayed 5 years by war

Published February 2020 by David Grossblat: In late 1941, the Tatsuta Maru (romanized at the time as “Tatuta Maru”) was heading from Japan to Honolulu and San Francisco carrying passengers and mail for the US. It was called back to Japan mid-journey because of the imminent Pearl Harbor attack. I recently acquired a cover containing a holiday greeting card, mailed at Kōbe on 27 November 1941, addressed to Troy, New York. The cover, front and back (showing that it bears a censorship seal)… 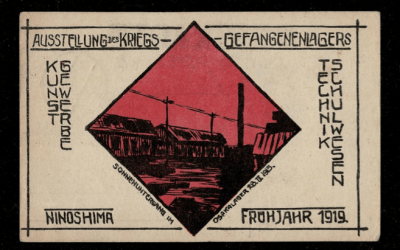 The 1919 Ninoshima Camp Exhibition and its Postcards

Published December 2019 – Vol. 74: No. 5: Japan was involved in World War I as a member of the Allied Powers and declared war on Germany on 23 August 1914. A strategic methodical campaign supported by vastly superior numbers resulted in the surrender of the German forces defending the colonial concession at Tsingtau (Qingdao) in China on 7 November 1914. Approximately 4,700 German and Austro-Hungarian prisoners of war were subsequently transported to 16 camps in southern Japan. Some of these camps were older, having been used during the Russo-Japanese War, and included makeshift temple facilities and old army barracks. Few anticipated that over 5 years of internment was to follow.

Japanese Joint Issues with Other Countries

Japanese Joint Issues with Other Countries Published October 2019 – Vol 74: No. 4 by Ken Kamholz, with additional research by Toni Lumsden When there is an event or anniversary that directly involves Japan and another country, it’s not unreasonable to think that Japan Post might coordinate the joint issuance of one or more commemorative stamps with the postal administration of that other country.

Use of Acceptance Time Certification on Registered Mail

by Anker Nielsen. Published August 2019, Vol.74: No 3. It is sometimes important to know the date and time when a letter was accepted at the post office. It is possible to look at the date and time in the postmark, which will give the date, but the time will be a time interval, for instance 6-7 a.m. (or today with longer intervals such as 0-8 a.m). And if the post office uses a machine label as postage, then it will give only the date.

For most mail the information provided by the postmark is enough, but in cases when you want the exact time the post office provides a special service called 引受時刻証明 (hikiuke jikoku shōmei or “time of mail acceptance certification”) used with registered mail. Proof of the service is provided by a special handstamp on the letter in which a postal clerk has handwritten the date and time (in hours and minutes)

Japanese Military Mail from a Force North of Australia

Japanese Military Mail from a force North of Australia in World War II by Stephen Dowd. Published April 2019, Vol. 74: No 2, of Japanese Philately. Recently an English auction house offered a lot described, in part, as follows: “World War Two – Australia Invasion Force. The description went on to say that the 1942 blue stampless postcard had a return address of the “7th Air Division, 38th Airfield Battalion, North Australia Military Force”, from the forces intended for the invasion of Australia.”

My interest was piqued. I particularly collect postal history concerning the expansion of Japan’s Empire, and its contraction, between 1931 and 1951. . .

1889 cover with interesting markings by Zach Lawrence. Published February 2019, Vol. 74: No. 1 of Japanese Philately. Late last year I purchased this cover (illustrated on page 37) on eBay. The cover was postmarked at Carlinville, Illinois on 18 March 1889, and addressed to Mrs. A. G. Taylor at Kanazawa, in Kaga Province, Japan. Alfred Taylor and his wife were sent to Japan by the American Presbyterian Church as missionaries in 1888, and remained there until 1893.(1). . .

2018.9.3 Lighthouses 150th Anniversary. Published December 2018, Vol.73: No 5 of Japanese Philately. The opening of Japan to international trade in 1858 brought an influx of foreign ships whose masters complained about the lack of navigational aids, especially lighthouses, on the approaches to the treaty ports. Consequently, when Britain, France, the U.S.A. and the Netherlands signed a revised commercial treaty with Japan on 1866.6.25, they took care to write into it a requirement that “the Japanese Government shall provide lighthouses…..for the safety of ships entering and leaving the ports that have been opened to foreign trade”. . .

Japanese Antarctic Research Expeditions 17 and 22 cancellation service update by Hal Vogel. Published October 2018, Vol.73: No 4 of Japanese Philately. In relation to the Q and A item that appeared at JP 73/102, I’m afraid we unfortunately must disagree with the cited source. Both JARE 17 and JARE 22 had operating station/base (Shōwa) and ship (Fuji) post offices. Examples of Shōwa base cancels and Fuji cancels for JARE 17 are respectively shown on page 149 in Figure 1 and Figure 2, while Figure 3 shows both the JARE 22 Fuji cancels (top) and the Shōwa base scenic datestamp (bottom). . .

Meter labels and equipment used for self-service at post offices—1970 to 1990 by Anker Nielsen. Published August 2018, Vol. 73: No.3. In this article I will go in to more detail and discuss types of postal meter machines that were used for the self-service of mail inside Japan. This will also include the examination of the different types of special meter labels that were used only for self-service machines at certain major post offices. (1) Many of the first machines were designed for parcels, but the labels could be used on all types of postal items. I will show both the meter labels and their actual use on letters or postcards.