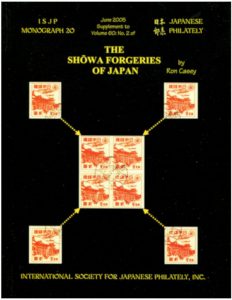 ISJP Monograph No. 20: The Shōwa Forgeries of Japan

The collective term ‘Shōwa forgeries’ has been generally accepted as referring to skilful forgeries discovered in 1961 of eleven denominations of Japanese regular-issue stamps from the Third Shōwa series and First New Shōwa series issued between 1945 and 1947.

This monograph presents the most extensive study of these forgeries ever published. The first two chapters describe and illustrate how to differentiate the genuine from the forgeries, including design characteristics, papers, watermarks, and a detailed examination of the various fake cancellations that were applied to the forgeries.

However, the major part of the publication consists of previously unpublished research on plate reconstruction, incorporating extensive studies of three of the values. This includes enlarged images of all known positions of these values, together with their identifying characteristics.

Most of the forgeries were separated into single stamps at the time of their production, and joined multiples are extremely scarce. The monograph concludes with illustrations of some of these rarities.