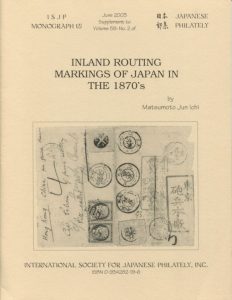 ISJP Monograph No. 15: Inland Routing Markings of Japan in the 1870’s

Prior to Japan inaugurating its own foreign postal services during the late 1870’s, overseas postal activity was undertaken by British, French and United States consular postal agencies located in the treaty ports.

These consular postal agencies typically handled mail addressed to and from foreign residents written in their native language. As knowledge of foreign languages was virtually non-existent amongst Japanese postal employees, procedures evolved to ensure that mail carried both to and from the consular agencies within Japan reached its desired location. These procedures included the application of markings for the inland routing of mail, either handwritten, or in the case of regular senders or recipients, inscribed by specially prepared handstamps. These markings, very few of which survive today, form the main theme of this monograph.

Besides discussing the various markings, accompanied by detailed illustrations, the author also includes historical and biographical details about some of the addressees, such as the French military missions and their personnel.