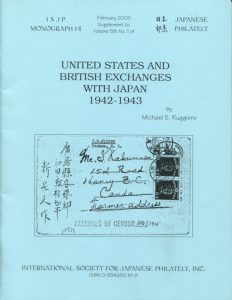 This monograph chronicles the fascinating, but relatively unknown story of exchanges of Prisoners of War (POWs) and civilian detainees between Japan and the Allies during World War II. These exchanges were negotiated through neutral countries, and were undertaken by chartered ships at neutral ports such as Lourenço Marques, Portuguese Mozambique, and Marmagao, Portuguese India.

Through painstaking research, the author, Michael E. Ruggiero has uncovered revealing information about the largely unrecorded details of accompanying mail included in the exchanges. He illustrates several examples as well as copies of associated mail such as letters written on board ship and mailed at ports visited after the exchange, letters mailed from the neutral exchange ports, and airmail addressed to passengers sent to ports that their ships were scheduled to visit.

Comprehensive information is also provided about each participating ship, including its movements while participating in the exchanges, as well as its post-exchange history.