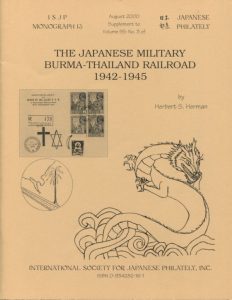 The author of this monograph, Herbert S. Herman, has expertly woven a short narrative of the construction of the Burma-Thailand railroad with a study of the railroad’s postal facilities, and its outgoing and incoming mail.

The majority of the monograph deals with mail to and from the many allied Prisoners of War (POWs) forced to build the railroad by their Japanese captors, although mail from the Japanese military forces and employed Burmese civilians is included as well.

It is profusely illustrated with copies of covers and cards, the majority of which have been drawn from the personal collections of correspondence between a small number of allied ex-POWs and their families. Mr. Herman incorporates personal details of some of these ex-servicemen, including their photographs, and biographical details of their capture and internment.

The monograph also includes a number of comprehensive and detailed listings, including catalogs of postal stationery, assigned Japanese military units, and locations of POW camps.