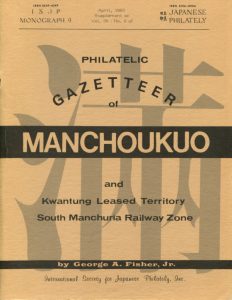 This monograph very successfully achieves its stated purpose “to aid philatelists in identifying postmarks of Manchoukuo and the Japanese native-language postmarks used in north-eastern China”.

The main listing in the publication provides details of over 2,000 post offices and is arranged in the classical dictionary sequence of the first kanji of the listed names by radical and stroke count, and is quite easy to follow, even for those readers previously unfamiliar with this system. Each entry includes the Chinese romanization of the post office name, and the county and province in which it was located.

An alphabetic listing in Chinese romanization order provides an invaluable cross-reference. Additional information is provided for those Japanese post offices in the Kwantung Leased Territory and the South Manchuria Railway Zone including money order-postal savings office codes, usage of roman-letter postmarks, and dates of operation where known.

Detailed maps of each province further assist the reader in better understanding the post office locations.