Each of the Foreign Mail postmark study groups maintains a listing of all the different post offices where a usage of that postmark has been recorded, including the first and latest reported dates. Please refer to the current listings to determine if you can provide information about a new post office, or an amended first and/or last date for an existing entry.

When international mail resumed after World War II, a number of offices that had previously used Roman-letter cancellations temporarily resumed use of their comb cancellers.  These cancellers had either JAPAN or NIPPON in Part C.  As a matter of expediency, these “retro” comb postmarks were tolerated until a new foreign mail marking (the swordguard) was developed and approved by the occupying forces. Different post offices used cancellers with either metal or rubber components, and some of them used both. The OTARU cancel below is an example of a metal type that has large date numbers, while the TOKYO AMF cancel is and example of a rubber type with small date numbers.

After the comb cancellation was replaced with the swordguard in 1952, a modified version of the comb cancel continued to be used for administrative purposes. In this modified comb the month appears in Roman numerals, whereas in the earlier combs the month appeared in Arabic numerals. From 1986 new types with single circle were used. There are 3 types.

This is the standard cancel on mail from Japan to a foreign country in use today. Use started on 1 October 1986. The current list has 7000 entries in January 2022. 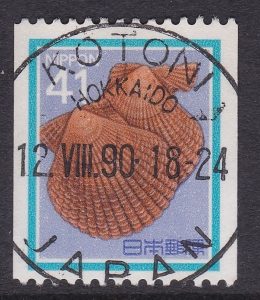 With the Year underlined

This type was in use in the years 2007 to 2012. The list currently has 364 entries of different post office cancels. 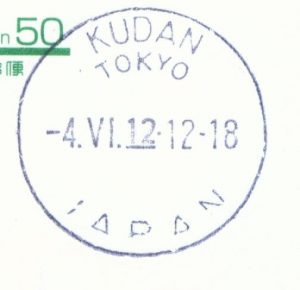 Month in Roman Numerals with Serif

This type started as an experimental type in some post offices in the Tokyo area from 1 April 2001 and is now in use for part of the post from many more post offices also in other parts of Japan. The list has current 291 places. The illustration shows a case with both line under year and serif in Month. 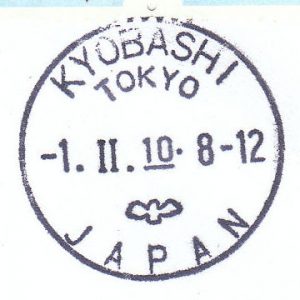 (a) TWO VERTICAL TYPES pre-World War II, used from 1 October 1910, and distinguished by the inclusion of either the word JAPAN or, after 19 Apr 1934, NIPPON. 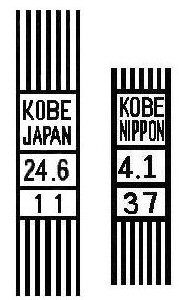 (c) Horizontal with the Year Underlined 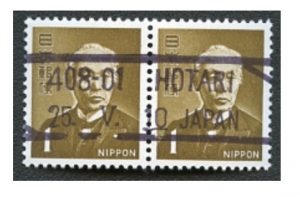 This type was in use in the years 2007 to 2012. The list currently has 63 entries of different post office cancels. (Listing)

These cancels were officially in use from 10 April 1952 to 1 October 1986, but later dates are found. The list presently has 3,325 entries of different post office cancels. 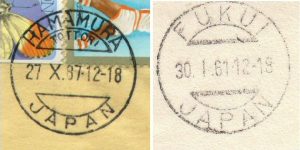 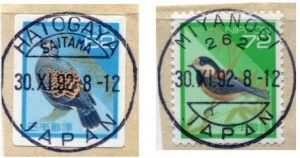 These special swordguards were in use from 1952 to 1967.   Presently there are  entries of different postmarks. 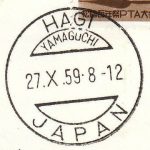